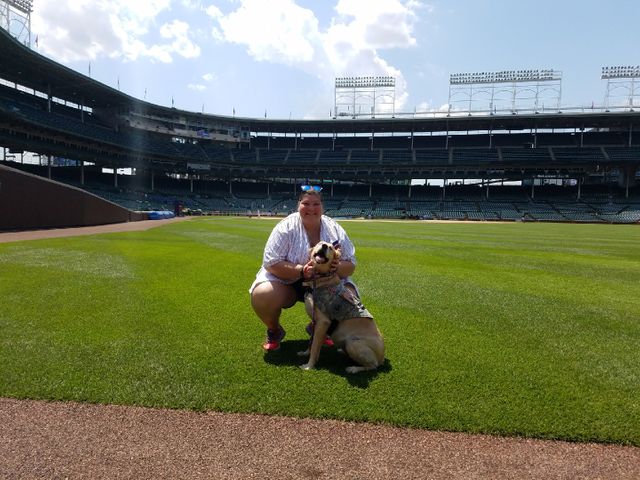 WAYNESVILLE - Katie Knight and her service dog, Minders, have been a team for almost four years.

Knight served in the Army for eight years. During that time, she was raped and stalked. After she left the Army, she began suffering from military sexual trauma, or MST.

Shortly after that, Knight lost everything she owned in a 2013 flood.

Knight said Minders has helped her get her life back.

"The first big outing that we had was a blues game, it was actually Veterans day," Knight said. "It was amazing to go to a game and actually be able to focus because I knew she had my back."

While Minders is a trained service dog, Knight said there are fake service dogs that hurt the reputation of the real ones.

Knight saw this confusion first-hand when her dog was bit by a poorly trained dog whose owner claimed it was a service animal.

Service dog fraud is a growing issue nationwide, according to dog trainer Cindy Ludwig, and some states are beginning to crack down on fake service animals.

"It's very common for people to fake a need for a service dog. The dogs are being trained by trainers who lack the knowledge and skills to be training them," Ludwig said.

Ludwig and Knight both agree the public is not educated enough on the different kinds of service or support dogs and which are federally protected.

"Just like anyone else who may call themselves a journalist and they're really not a journalist, they give journalists a bad name," Ludwig said. "The same could be said for dog trainers who pretend to be service dog trainers but they're not."

Service animals must be trained to perform tasks for a person with disabilities, like alerting and protecting a person who is having a seizure, calming a person with PTSD or MST, or reminding a person to take certain medication. Service dogs are working dogs, not pets, and are federally protected.

For example, Minders is trained to help with Knight's anxiety in large crowds. Minders will nudge her hand and, after being given a signal, will jump up and give Knight a hug.

Therapy dogs are not federally protected and only provide emotional comfort.

Emotional support dogs are protected by federal law when it comes to travel and housing -- they are allowed to live in places with a no pet policy.

Her study looked at who was writing ESA certification letters and why. The study found the letters are written by psychologists, but some are written as favors, or when an ESA is not really necessary.

Boness said writing letters when an ESA is not needed is "inappropriate and goes against some of our ethics."

She said forensic psychologists should be writing these letters because they are more objective.

"When people have emotional support animals and don't actually need them or they don't have a mental illness that requires the presence of the animal, it's really jeopardizing and delegitimizing actual service animals.

Missouri law states impersonating a service dog is guilty of a class C misdemeanor and would be civilly liable for the amount of damages resulting from the impersonation.

However, when an animal enters a business, the business is only able to ask two questions: if the animal is a service animal and what tasks is the animal trained to perform.

According to Knight, most businesses will not ask even the second question, but there should be more regulation to this ADA law, so Minders can do her job without any distraction.

"[Lawmakers] need to come up with something," Knight said. "I wouldn't have a problem having my dog tested and that going into a national database."