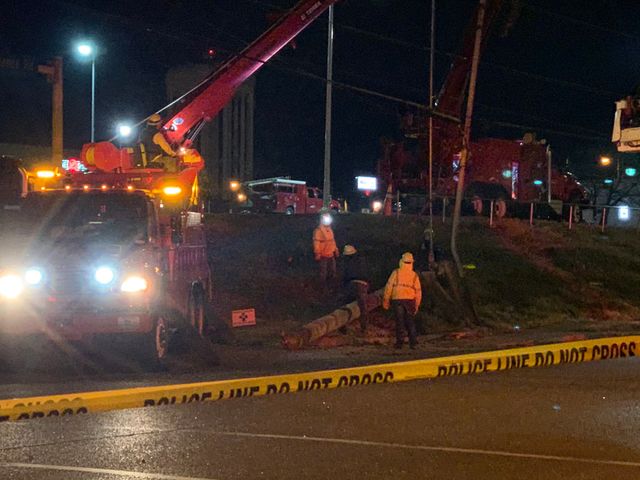 Officers on scene told KOMU 8 News the crash was the result of a police chase.

According to the Columbia Police Department, the chase began at 1:50 a.m. after an officer attempted to initiate a traffic stop in the area of 9th Street and Cherry Street after the officer observed a Volkswagen Beetle go through a red light without properly yielding.

When the officer activated his emergency equipment and attempted to stop the vehicle, it fled and the officer lost sight when it entered the University of Missouri Hitt Street Parking Structure, according to the release.

The officer then saw the Volkswagen exiting the garage and noted it had struck a parked vehicle.

The Volkswagen failed to yield to another vehicle at a four-way stop and continued to flee at a high rate of speed going northbound on 9th Street.

Police said the chase stopped briefly downtown but then picked up again near I-70.

The same Volkswagen was seen by another officer entering I-70 going eastbound from West Business Loop 70 at 1:56 a.m.

As the second officer attempted to stop the Volkswagen, the Volkswagon failed to stop and exited I-70, traveling south on Providence Road.

The officer began to chase the Volkswagen southbound on Providence Road toward Walnut Street.

Police said the chase ended when the driver's Volkswagen Beetle hit a utility pole at the intersection of Providence and Locust.

According the the crash report from MSHP, Holt was not wearing a seatbelt. A medical examiner pronounced him dead at the scene.

Officials closed Providence between Locust and Broadway for a time before reopening it.