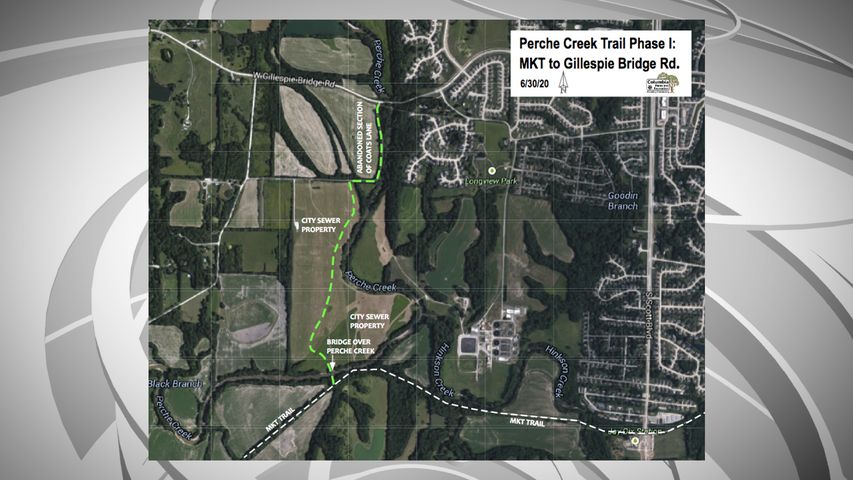 UPDATE: Columbia City Council approved the construction of the Perche Creek Trail at its meeting on Monday.

COLUMBIA- The Columbia City Council will vote on whether to authorize the construction of the Perche Creek Trail at Monday's meeting.

If passed, the trail will extend from MKT to Gillespie Bridge Road in West Columbia, creating a 30-mile loop.

Michael B. Griggs, Columbia Parks and Recreation Director said trail use has grown since the COVID-19 pandemic started.

"People love the trails now. When we had the IP meeting about the plan at this shelter, people were non-stop for two hours expressing their support."

The idea to extend the trail has been in the works for over two decades.

The City of Columbia's park sales tax will pay for the project, and the Parks and Recreation Department applied for a $250,000 federally funded recreational trails program grant.

Bicyclist Ken Germond was excited for the possibility of a new trail.

"We have a great trail system, but it would be a lot better if it were looped and if the city would be more connected."

One Columbia resident, Cheryl Spiller, isn't happy with the timing.

"I love the trail; it's great for Columbia, but the timing is wrong. I hate to see money spent that is not a necessity, and it is not good timing."

City Council votes on whether or not to pass Monday at 7 p.m.